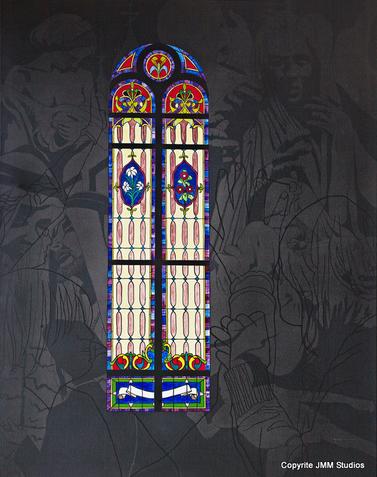 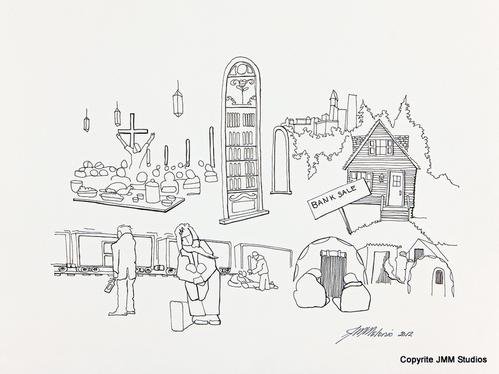 Greetings, friends! My name is Jim Melonic and I have been an artist my entire life. I was very young when I started making art, and I still find great solace in drawing, painting, and sculpting. For me, art is not only a lens through which I see and interpret the world; it is also a platform for connection and conversation. It is my goal with this blog to share some insight into my creative process and invite others to have a seat at the table.

The first painting I'll be discussing is “Religion or Relationship.” This painting is commonly referred to as “The Stained Glass Window,” because that’s what it depicts—at least at first glance. As a child in Sewickley, Pennsylvania, I was greatly moved by the art and iconography of the Russian Orthodox Church. The stained glass window is a defining feature of the church, and it has indeed become a symbol of religion (Christianity, specifically) for many of us.

“Religion or Relationship” began with a graphic called “Coverdish Dinner.” I created this graphic as an exploration of the complacency of some of the people of the church. There is a comfort in that which we already know, and it can be tempting to avoid the challenge that exists outside our comfort zones. Among some church people, there is a strong desire to be an “innie”—to remain complacent in their own, known environments, rather than reaching out to those that live beyond their familiar borders. Relationships call us to a higher purpose of connection and stewardship; they are not an excuse to cloister ourselves and foster only those friendships that are easy—those that lack challenge and growth.


You can see an early version of the stained class window in the center of the graphic.

The stained glass window is a good, strong symbol of the church. But it’s what exists outside that stained glass window—beyond its borders—that defines its very purpose. Those figures in the “background” of the painting—in various stages of focus and development—are the ones we should be reaching out to. Those who have a different understanding than our own. Those facing hardship and crisis. They may be adversarial or indifferent—it really doesn’t matter. It is our job, as servants, to reach out with love to connect with these figures, to see them as people ultimately walking the same path as us. We’re all in this together, and that is part of the larger message of this painting.